With a range of quality animal feeds for Cattle sheep pigs and horses all bagged in 20kg bags plus feeds for camelids and small animals such as Rabbit.

Direct farm supplies has been looking to expand our range of livestock feeds to suit all budgets and offer more variety to our existing range of animal feeds with a more consistent and reliable animal feed supply.

We will be buying Heygates animal feeds direct from the Heygates mill so we can offer feeds at a more reasonable price without going through a wholesaler.

With a weekly delivery schedule (mondays for us) it is possible for Direct farm supplies to get your animal feed order to you within 10 days.

Our main supply area is Gloucester with free delivery within 10 miles of our store. For direct delivery of Heygates animal feeds to your farm we would require a minimum order of four tonnes.

Direct farm supplies attended the Frampton country fair on 11/09/16 and a great day was had by all. We had a display of products from most of our main suppliers who were all happy to help out with promotional material and Banners to display.

Due to the success of the day we will most probably be attending again next year. 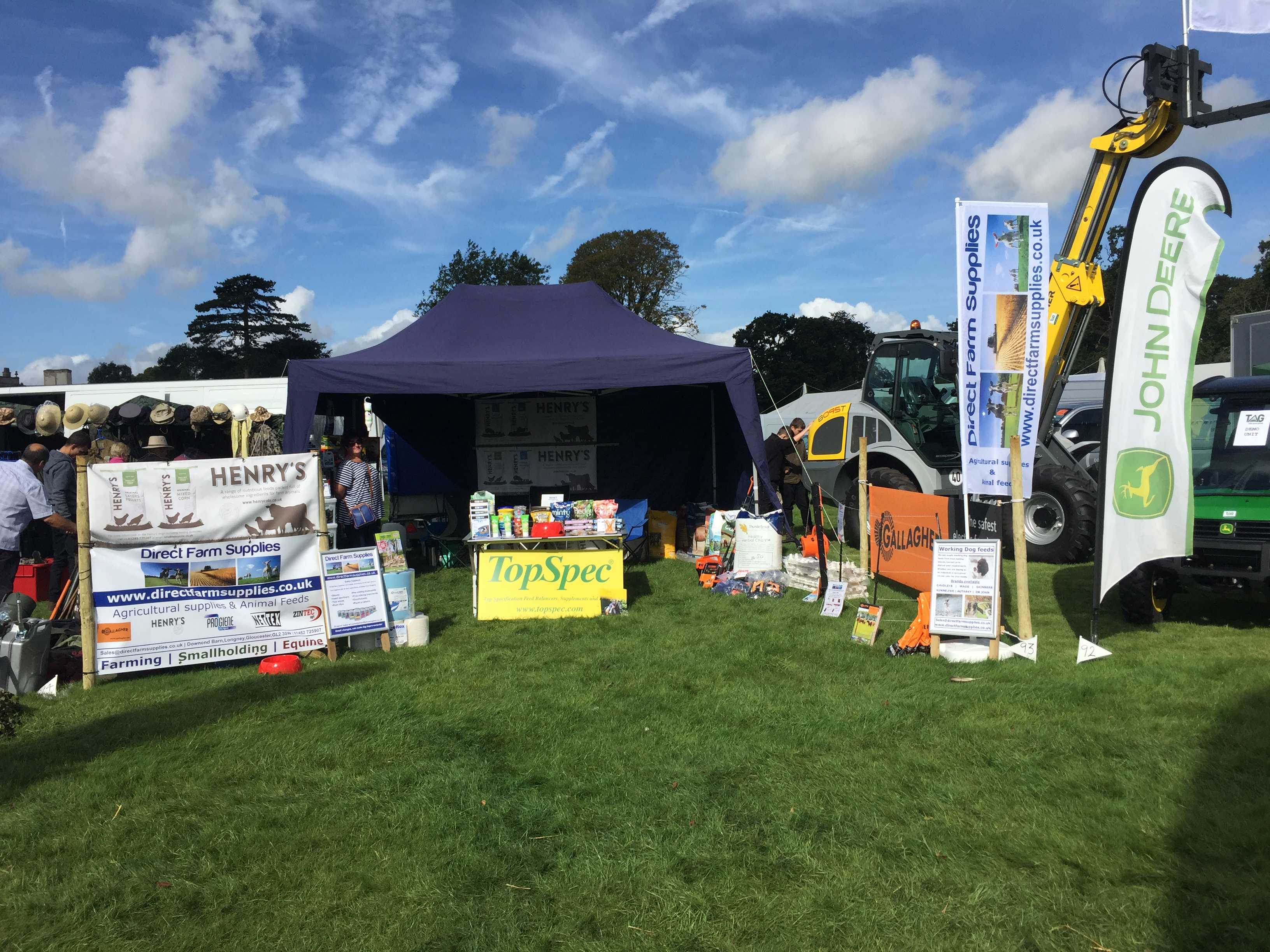 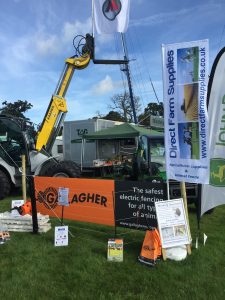 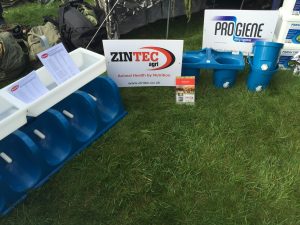 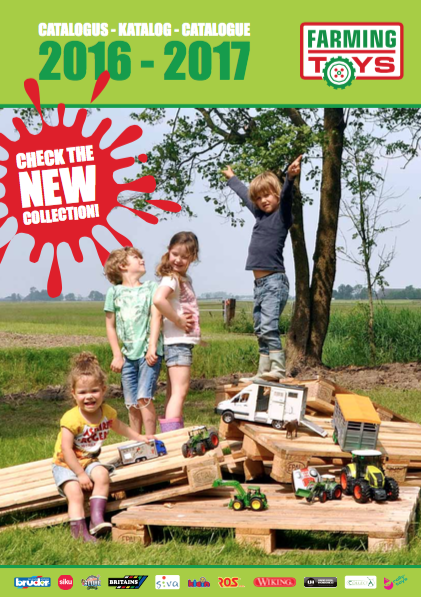 Please view the catalogue and email us with the product code, we will then get a price for you.

Frampton country fair is held in 30 acres of beautiful parkland of Frampton Court Estate, one of the last truly traditional country fairs celebrating all that is great about the countryside and the people who work and live in it.

Over 400 trade stands, three display rings so much to see and do.

Weighing and EID equipment (electronic Identification) can streamline the process of recording animal data for farm records, eliminating the need for a clipboard.
Traditionally you would weigh an animal, recording it’s weight against an ear tag number.

Why use electronic weighing and EID equipment

With an old needle type weighing unit you would usually have to guess the reading as the animal jumped about in side the crush possibly leading to inaccurate information.

Once all of the animals are finished weighing, you then need to enter this information into a farm management system e.g. Farm plan, this takes time.

With a digital weighing system the animals weight is locked within seconds even when jumping about in side the crush with at least 1% margin for error.

Not only will the EID tag reader store the animals weight, it will also record other information such as medication, lameness, age and also link mothers with off spring (mothering). This information can be transferred to a computer system either via Bluetooth or by removing the SD card from the EID tag reader.

With a medical record the unit will display whether or not the animal is in a withdrawal period and/or any other notes which were recorded the last time they were scanned. 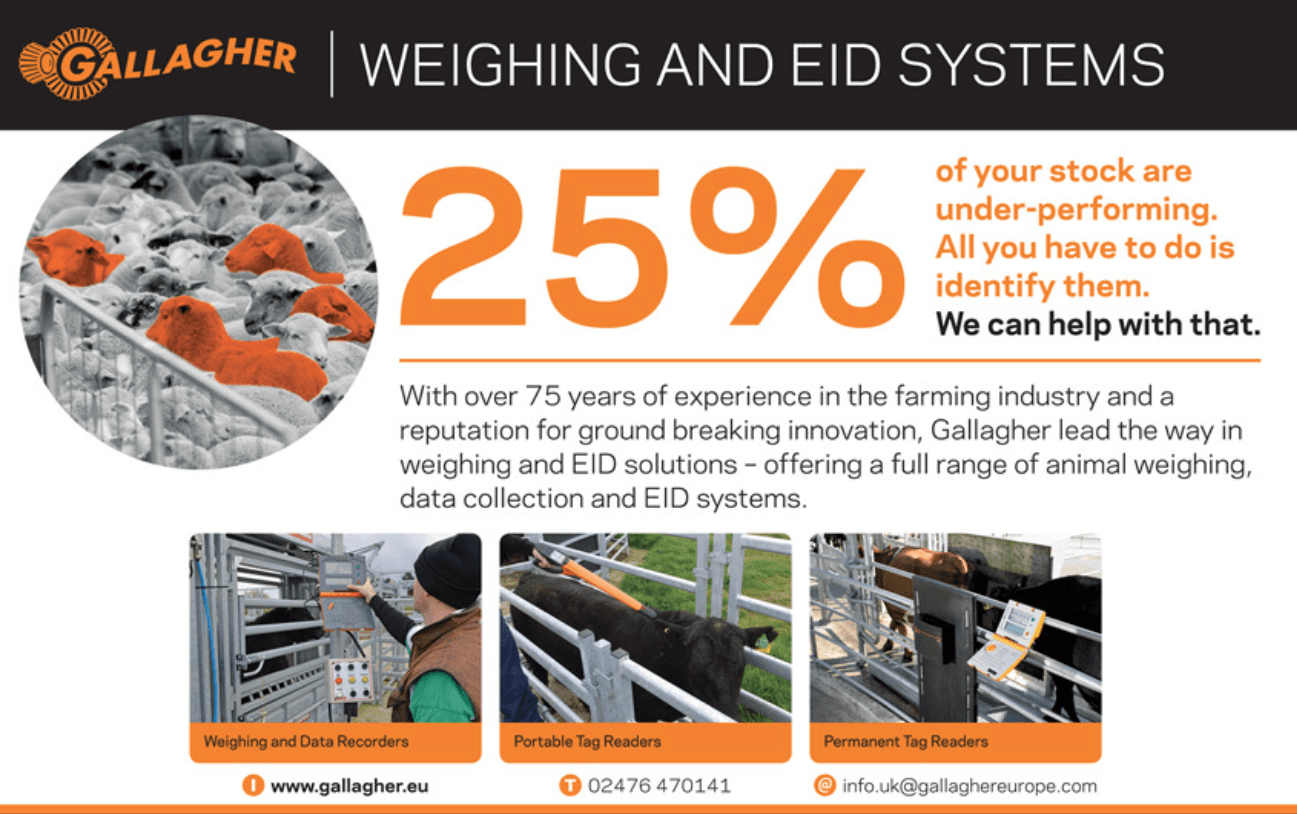 How will electronic weighing and EID equipment save me time and money ?

Using the following example you can get an idea of how EID equipment can  benefit you (it is just an example, not based on a real scenario).

With an EID tag reader with data recording capabilities (Gallagher HR5 £1,599.00 inc vat), the relevant information is recorded at the time of weighing so will take less than an an hour to transfer the data from the reader or the SD card onto a computer.

If you have already stored an animal onto the EID tag reader then this will take even less time to process. 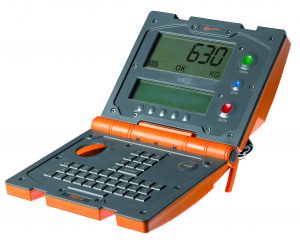 Other benefits of EID equipment.

Information can be downloaded as excel document.

Can be used to notify animal movements with BCMS.

Portable units can be moved around farms easily.

Long reach without reaching into crush or race.

Starting with the electric fencing energiser.

What do I require from my electric fence?

Whatever your electric fencing requirements are it is important to select a good quality energiser with the correct ratings to maintain  an effective barrier for livestock.

we would also advise against going into a farm supplies store and picking the cheapest electric fencing energiser on the shelf.

Why? because you might have just wasted £80.00 or £90.00 on an energiser which isn’t up to the job and these cheaper energisers are mass produced skimping on quality and they just do not last. Always ask advice from staff who should be happy and willing to help talk you through the technical differences between each different product.

Electric fencing brands we would recommend are Gallagher first (they pretty much invented the electric fencing energiser) with PEL being quite close behind (which we used to sell), both manufactured in new Zealand for the extreme conditions of new Zealand farming.

And at a push Hotline or Rutland energisers,but that is really a last resort an example of you get what you pay for, it’ll do the job but for how long?. 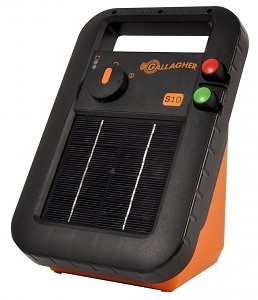 Gone are the days when you had a separate energiser with a separate solar panel (more often than not was quite cumbersome) which are needed to be moved every time you move the fence. The Gallagher range of solar electric fencing energiser are probably the best available on the market.

Battery fencing energisers are also ideal but they can be a problem when batteries keep running out (with regular inspections required) unless you choose an electric fencing energiser with a solar option, which can extend the battery life considerably and with day night capabilities the energiser runs at a reduced power during night time.

If your electric fence is required to run around the perimeter of your farm or smallholding and everything in between, then a mains electric fencing energiser would be ideal with monitoring capabilities and a remote option for fault finding.

Check back for advice on electric fencing accessories…..

The information about electric fencing energisers is mostly based on our own opinions based on experience from our own farm. 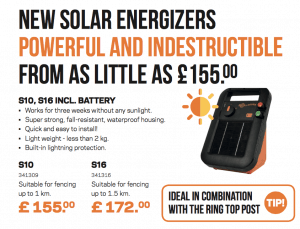 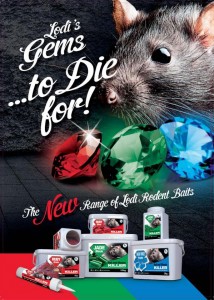 Fresh calver is a rehydration aid for cows which have just given birth. Just mix a pre packed sachet with warm water and top up with cold water.

Available in two sizes :- 10kg and 20kg, each containing either 10 or 20 individual 1kg sachets ready to mix. 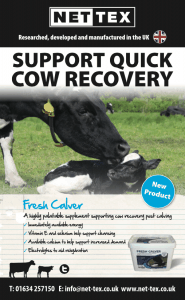 www.directfarmsupplies.co.uk is owned and maintained by Direct farm supplies Ltd based in Gloucestershire in the UK.company no:7258626. Copyright 2020 all right reserved.

We use cookies to ensure that we give you the best experience on our website. By continuing to browse this site you give consent for cookies to be used.